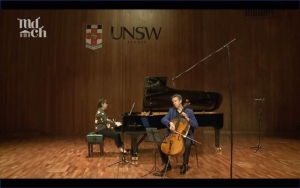 How was the MDCH ‘concert day’ experience different to a regular subscriber concert at Clancy Auditorium?

As there were in fact two digital concerts that evening, we had a prescribed period to come in (hand sanitiser at the door) and occupy our positions. These had been measured out to ensure we weren’t too close. We did a bit of rehearsal while the cameras and sound recording equipment was adjusted. We were on stage up to three minutes before the “concert”, then walked out of shot ready for the beginning.

How did it feel performing in an almost (physically) empty Clancy Auditorium?

Obviously it was a very different feel to be giving a committed concert to an empty hall, but when one considers rehearsals before our regular concerts I have in fact played more in an empty Sir John Clancy Auditorium than one with an audience.

We only found out several days before that this concert would be hosted at the Sir John Clancy Auditorium and it was wonderful to be playing in a good acoustic with which I was very familiar. Standing off camera waiting for a silent countdown was a bit weird, and we didn’t know what to do at the end and slunk off (this prompted responses from friends and family as to what we could have done better).

As far as the actual performance felt I was very aware that as a live-streamed concert there was an audience out there. I found myself, to my surprise, enjoying the experience as much as if the audience had been physically present.

What do you think about Melbourne Digital Concert Hall and other online initiatives striving to make classical music more accessible?

This has been an incredible gift for performers. Apart from a welcome bit of income the opportunity to still express yourself as an artist is something I didn’t know I was missing so much until I gave the performance.

There are many many short music videos made by performers in their living rooms, but the MDCH performances give both performer and audience the sense of an actual formal concert. I actually see a lot of value in streamed concerts, and I don’t think it would be a bad thing if when life returns to normal we have somewhat more of them in the mix.

Have you watched any digitally streamed performances at home? What have been your favourites?

True confession: I’m afraid I haven’t watched any. I’m so ashamed, but I find it hard to watch a performance without my analysis brain switching on, and the mood of these last few months have lead me to prefer to curl up on the sofa with my family and dogs and watch bad television. 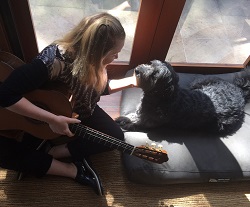 Karin Schaupp with one of Julian and Dimity's dogs, Scout

What are you most looking forward to doing when public performances are able to resume?

I’ve missed rehearsing with my colleagues a lot. I love the performing and interaction with an audience, of course, but the hours of artistic discussions and technical polishing that go into presenting a single piece of music on stage are hours I find stimulating and exciting.