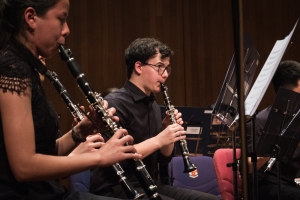 We asked UNSW Arts student Ben Curry-Hyde what UNSW can do to support music performance as students begin to return to Kensington campus.

Alex Siegers: Ben Curry-Hyde has been heavily involved with music around UNSW since he began his Bachelor of Music in 2016. He has been the Concertmaster of the UNSW Wind Symphony and is currently Principal Clarinet of the UNSW Orchestra, as well as conducting his own performances around campus.

BC-H: MPU has been a huge motivator for me throughout my degree. It’s also been a great source of information and experience. From the people in MPU – how to write program notes, and giving me the opportunity to work the doors at Australia Ensemble concerts, to the Australia Ensemble themselves and getting to see those fantastic concerts, and get an idea and appreciation of what I can do with my degree afterwards and what music can do.

BC-H: I think the university could offer some more support and guidance for student-led concerts and programs - on campus or online, either would be great. At the moment we have a lot of concerts at the end of term, and throughout the term it’s a lot less – there are a lot less programs. I think, possibly, getting to see student-led programs that are maybe smaller in the earlier weeks of the term would be a great opportunity for students that aren’t slammed by exam blocks to get involved in performances and see some of their fellow students performing and playing the music that they love.

BC-H: It’s been an interesting transition to online learning. I was involved in the New Music Collective in Term 1 which was great. We started working on John Luther Adams’ Ten Thousand Birds, which was a fantastic piece, and thankfully we could perform that online late in Term 1. And doing that was a really eye-opening experience – transitioning from an in-person ensemble to an online performance, where I got to see the nuance of how to work in person, and how that translates - or maybe doesn’t translate to an online platform. And also let me see what I can do as a performer for audiences today who, more and more, things are going online.

BC-H: I’m now in Term 2. I’m getting involved in the online orchestra and it’s been a lot of fun getting to see some of my friends and colleagues again and kind of playing with them, even if it’s just though a camera.

BC-H: Studying has been interesting. I’ve - it’s a lot more self-driven and a lot more careful study, which has been good, but I would like – I look forward to being able to play with ensembles and my friends again, in the near future, hopefully.