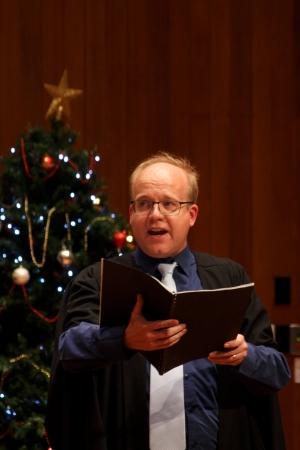 Alex Siegers: Since relocating to UNSW in 2013, Dr Stuart Prescott has been a staunch member of the Collegium Musicum Choir (CMC). When he isn’t singing, he is a researcher and academic with the Complex Fluids Group at UNSW Engineering.

How does Collegium Musicum Choir fit into your life at UNSW?

SP: I’ve been singing since I was a young lad, and choirs have always been a part of my life. So, when I got to university as a student, one of the first things I did was join the choir and then, throughout my career as I’ve moved from university to university, chasing jobs and post docs and academic positions, the first thing I do in a new city is find a choir and join it. And it’s usually been a choir based at a university, partly because I just find that the university choir is such an awesome, academic thing.

So you have a collection of really keen, young, talented students who are, often, musically much more talented than me, but they are the raw material; they don’t have the experience. And so, I might have some decades in experience in choral singing on them, and sort of know how to do a thing, but they know the theory, and they have the study of how to make it really work well.

So, I love choirs as being an important part of the university.

How has the campus closure and various lock downs and quarantines impacted Chemical Engineering this year?

SP: So, not being on campus for the last couple of months, although I currently am in my office doing some work, not being on campus for the last couple of months hits us in lots of different ways. I mean, as an educator, I miss the students. So we have a section of our students who are not on campus at the moment because they’re stuck overseas. We have a whole lot of students who are not on campus because they are learning from home. And it’s very hard to teach people remotely – it’s not nearly as fun to interact with students via the occasional text message and maybe a quick chat, it’s not the same as interacting in the lecture theatres and the tutorials and the like. So, yeah, we miss the students.We’re starting to reopen our labs, and so we have our research students into our labs now and some of our people are making some progress of the research front as well, which is good.

And how has it impacted you?

SP: Missing choir – that’s one of the big things. Choir is a big part of my week – I mean, it sounds a funny thing so say, it’s a two/three hour block on a Wednesday evening but it’s that contact with an entirely different group of people, it’s that mental release from thinking about molecules and surfactants, and shampoos and paints that I do for my research, its that release from worrying about that big pile of assignments that need marking for the teaching, and it’s a chance to think about the beauty and the music, and interact with lots of different people. And so, not having that in the week, that’s really sad.

And so, it’s been lovely that Sonia’s been running our little online Zoom sessions for choir over the last few weeks. It’s not quite as good as the same thing but it is nice to see the people and get some music still.

What do you think draws engineers to music and/or musicians to engineering?

SP: There’s an amazing correlation between people studying science and engineering, and music. Art as well, to an extent. Painting and chemists for some reason seems to go together. But, yeah, maths and physics, which is the underlying sciences underneath engineering; maths, physics and music are things that tend to go together quite a lot.

I have theories. I mean, the beauty, the mathematical beauty of something like Bach choral writing is fantastic to look at. You can see the symmetry and the maths within it – you can see what he is trying to do. There is, there is a set of rules that you follow as part of it – a lot of music is very, very mathematical but there is this artistic beauty added to it as well, and so there is appeal to it in that. So yeah, I think there is a lot of reasons why we have these correlations between maths and science and engineering, and then we have a whole lot of people in choirs and orchestras and the like as well, for the same reasons.