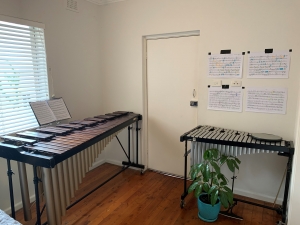 UNSW Arts student and Young Regional School of Music alumna Freya Steele has been driving across country NSW to find a marimba to play while UNSW Kensington campus is closed.

Freya Steele: But I really also love timpani, which – it’s kind of heart-breaking cause I haven’t been able to do any this year, cause I don’t have four timpani lying around, sadly.

Alex Siegers: Freya Steele is a 4th year Bachelor of Music student and percussionist with UNSW Wind Symphony and UNSW Orchestra. Like many of our musicians, Freya didn’t grow up in Sydney – she is from Young, a small town in rural NSW and the self-proclaimed cherry capital of Australia.

How did you become a tuned percussion player growing up in Young?

FS: Umm, so, when I started music, I was in year 2 when I started piano because that seemed to be the standard instrument that a lot of people started off with. And my school was like, “Oh, do you want to learn percussion, because if you’re a pianist you can’t really play in the bands,” and things, so I was like, “OK, cool.” I didn’t really know what percussion was, I just knew it was like, drums. So, I just went, I was like “I’ll do that, ok, I guess I’ll hit some stuff.”

Umm, I had a very good tutor starting off for a couple of years. But then after that, I had some excellent tutors, but they were mainly drumkit-based. So, for pretty much the majority of my high school experience was with drumkit tutors which was great and fantastic. But, I was still going off and doing all these orchestra things and all these camps, and I always avoided tuned percussion like the plague cause I was like “I don’t know what this is.”

And, umm, and then one day I was like “Oh, I kind of want to keep pursuing this, like, go a bit further.” So, I got in contact with my tutor David Lockeridge who I had done camps with. And was like “Can I get some lessons off you?” cause he is, like, an amazing marimba player. And, yeah, in like year 10 I started Skype lessons from him on marimba, and just, that was it, pretty much. So, I stole the, or, borrowed the, it’s like, 4.3 octave, I think, marimba at my school. And, yeah, no on else used it, so I just took it home with me and I just had it. So, it was really, really handy that they actually had one.

The Young Regional School of Music, that had the marimba, so they are like, yeah, it’s on the same block as the high school and that’s where I did all my music stuff, yeah amazing that they had one. And a vibraphone as well. I think they had two timpani.

How have you survived your honours year while campus has been closed?

FS: It has been quite a year for doing honours. It wasn’t quite what I was expecting, at all. I had to retreat back home for a while and I’ve been - from then I’ve been borrowing some instruments from my old school of music in Young and so, I’ve got a marimba and a vibraphone. And I’m back in Sydney now so I’ve just brought them back with me, and then I’ll, in my own little bedroom studio, which is kind of crazy. Yeah, so, I haven’t been able to go on campus or anything to access instruments like I have been for the past three years, so it’s been a little bit chaotic, but I’ve made it work, it’s worked.

FS: Part of the good thing has been that I’ve still been able to learn off my teacher, and we’ve still been doing online lessons all this time, probably more often than we thought we were cause sometimes we get busy but I guess since there has been so much free time it’s like “Great, lessons all the time!” So it’s been really good in that way.

Tell us about your Thesis!

FS: So, my thesis is about musicianship and technicality and finding the happy medium between them in performance preparation, particularly percussion. Cause I think it’s very important that when we are learning a piece of music of music, that we incorporate the musicianship early on in the piece. So, I’m looking into that.