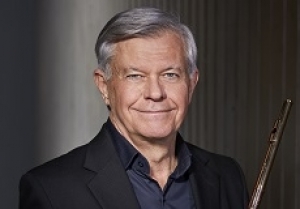 Geoffrey Collins, Image: Keith Saunders
From March to September, Australia Ensemble UNSW Flautist Geoffrey Collins was unable to travel to Sydney from his home in Adelaide. While we have missed him in Sydney, he has still managed to continue rehearsing and performing with Adelaide Symphony Orchestra; release 2 albums, one with long time collaborator Alice Giles; and conduct a flute masterlass for UNSW students.
Listen to Le Tango Perpetuel online
Listen to Harp In Chamber Music online

This is Geoff Collins, I’m the flautist with the Australia Ensemble. I’m also Principal Flute of the Adelaide Symphony Orchestra.

What have you been doing over the past six months with Adelaide Symphony Orchestra?

And so, we started off small. We have to, wanted to try and keep up the skills for the orchestra. So, we started off doing something we had always wanted to do, which was to do more things in groups. So, we did some, some weeks with just working with the wind section in smaller groups, distanced of course. We’ve got a special stick in the studio with all the measurements of what distance you’ve got to sit at.

We were all spread out. Kind of end up playing things in circles, sitting in a big circle so that we could see each other because it is very difficult. Musicians do rely on contact and being close to one another. And, so, we did a lot of work with smaller groups.

And then we started being able to do some small online content, concerts, spaced out. And then just the last few weeks we’ve managed to convince - through our plan that we developed – that we could, in fact, now play on stage. And I believe our colleagues in Brisbane and Perth are doing the same. In other words, we are playing in a normal format. So, we’re slowly getting back into it.

Next year looks different, but we will embrace that challenge.

Well this is a very special project because it’s not just getting together to record some music. It’s an expression of a certain period and time and connection between the players, and in particular, Ian Munro’s response to us.

Working with Ian has been, you know, a wonderful experience over the years and knowing us, and him, we knowing him, he’s, kind of, produced a series of wonderful versions of these pieces in response to us, but also, giving a different look at those particular pieces.

In particular, I’m very fond of the versions of the Ravel and Debussy pieces that he’s put on the album. So, if you asked me to nominate my favourite, I think it’s the Six Epigraphes Antiques that he’s, the version that he’s done for us of that which, which I think wonderfully captures the music and has some beautiful flute melodies that I’m very fond of in a Debussian kind of way.

So, yes, it’s a special thing for me – we go way back to high school. I’m a little bit older than Alice but we got, we began to perform together in high school, so we’ve been doing that regularly ever since. I mean, of course, her stellar career has taken her all over the world but we’ve always found time to get together and play some concerts for that combination and in chamber music. So, that’s a special thing to have that kind of long-standing connection with her, a player. She’s a wonderful artist.

I’m really pleased Alice has been able to get together these recordings with the Australia Ensemble on her CD, which is about her of course, principally. But they also speak to the history of her playing with the Ensemble and I love playing with her very much. It’s a special thing.

What is your favourite Australia Ensemble UNSW commission?

You know, we’ve had this extraordinary privilege of the university supporting us for so long and as is appropriate for being at a university, it’s enabled us to really create a very large body of work when you look at the list of all the works that go back, right back to 1980. There’s quite a big selection there.

I think the ones that stand out to me would be the Brett Dean Sextet which was a co-commission with The NASH Ensemble and eighth blackbird which is, I think, a remarkable piece of music. There is another piece by Roger Smalley called Poles Apart which I also found a very impressive piece. And, of course, we’ve worked very much with Carl Vine on a number of works, so, they’re a few highlights for me. Funnily enough, they all have good flute parts, so.