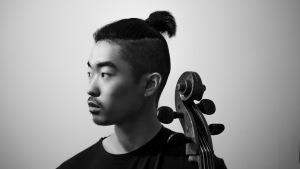 Winner of UNSW’s Concerto Audition last year, and our soloist for UNSW Orchestra’s Term 2 concert, we sat down with Hikaru Fuminashi who shared his reflections about his creative process preparing for the concert, his passions, and future endeavours.

Hikaru Fuminashi began his studies on the cello when he was eight, at the Sydney Conservatorium’s Open Academy with Rosalind Graham, continuing to attend the Conservatorium High School and Conservatorium’s Rising Stars program, studying under Susan Blake. Winning the Conservatorium High School’s Concerto Competition by playing Shostakovich’s 1st Cello Concerto, it lead him to perform the piece with the Penrith Symphony Orchestra at the Joan Sutherland Performing Arts Centre in the same year. Receiving the Corina D Mayer String Scholarship at the Sydney Conservatorium of Music studying under Julian Smiles, he lead the cello section for the Conservatorium’s Symphony Orchestra. Hikaru then moved on to study at the Royal Northern College of Music, where he studied with Hannah Roberts as a recipient of the Jellis Bequest Scholarship, and was a finalist of the Barbirolli Prize for Cello. During his studies at the RNCM he also performed with the Ormskirk Music Society playing the Dvorak Cello Concerto.

Having always had an interest in architecture he is now also currently studying Architecture at UNSW while pursuing his passion for music.

1.    How is it preparing for the concert, and what is your creative process in making your music alive?

Preparing for the concert is exciting, as it is in a state of potential, and the performance is that potential being realised. The creative process has been changing constantly, especially since I have started studying architecture, I have constantly changing, new ideas. I am no focusing on the movement of each note and chord, and how that might effect the sound and mood of the phrase.

2.    What is special about playing a concerto as opposed to being in an orchestra?

Playing in an orchestra really requires you to move together towards a single goal with the help of the conductor. Playing a concerto feels like a conversation, with conversations between the orchestra and soloist weaving in and out. Every orchestra/conductor has a different opinion on the same conversation topic, which makes playing the same piece with different orchestras so exciting and special.

3.     What is it about music that makes you feel passionate?

Music is such a unique form of expression and I sometimes feel like I express myself more clearly through music than I do with words. I believe it is hard to hide behind a façade playing music, it is something you must confront within yourself and feel vulnerable. Having such a personal thing being revealed, whether it be love, depression, or conflict, it is all a declaration for everyone to see.

4.     Are there any musicians that inspire you? And Why?

I am especially inspired by musicians that are not confined to their medium and willing to explore and understand other cultures and music. I grew up listening to Yo-Yo Ma CDs in the car and was just astonished at what the cello could do in so many different contexts, and listening to his Silkroad project introduces me and everyone to the beauty and uniqueness of different cultures and how it can unite people.

5.     What qualities do you think makes an awesome musician?

A musician who isn’t confined by technique. Musicians who obsess over technique miss the point of music - expression and conveying a particular message. Technique should be serving the music. It is not there for its own sake.

6.     With the concert coming up and as a performer, how do you handle performance anxiety?

I believe it’s impossible to get rid of performance anxiety. Instead, I try to focus on the music and phrasing, and find moments where I can mentally reset on stage.

7.     What is a piece of advice you can give to our student musicians?

Perform as much as you can and record yourself. If you get an opportunity to play, take it, even if you feel you are not ready. I find myself more aware of what I’m playing and how I react to a performance, which helps me the next time.

I am currently studying architecture at UNSW and really enjoying it. While music will always be a part of my life and have been rehearsing and performing with friends, I want to explore different mediums of expression and how they might interact. So, I am hoping to do both in the future.

Watch Hikaru perform the one and only Schumann’s Cello Concerto with UNSW Orchestra during their Term 2 Concert: Classical Czechia on the 5th August 2022, 7pm at Sir John Clancy Auditorium. Get tickets here