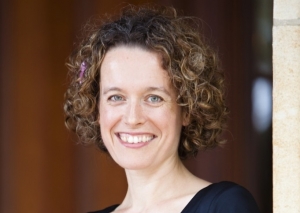 For the second Australia Ensemble UNSW concert in 2021 we will be joined by flautist Lisa Osmialowski for three works: Osvaldo Golijov’s Lullaby and Doina, Mélanie Hélène Bonis’ Suite en Trio, and Gordon Kerry's while the music lasts. We recently talked to Lisa about what she loves about playing music by Australian composers.

So, I play as a freelance flute player, mainly with Opera Australia Orchestra and Sydney Symphony but I do have lovely projects to look forward to in the form of chamber music, so it’s really exciting to do this program.

In this program you’re playing a huge variety of music - from French Romantic to a Romanian folk song composed by an Argentinian, to a recently commissioned Australian work – how do you prepare for a program like that? And how do you become such a versatile player?

Yeah, it’s cool to have a mix of things to get your teeth into. I really enjoy the interesting contrasts, between the old and the new music.

I have played the Golijov before. So, I am looking forward that that as well. It’s really cool, this haunting melody in the Lullaby and then the Gallop is really exciting. Sparks should fly, and it, kind of, reaches it peak, and, it’s just, a very exciting piece of music to play.

The approach to learning new music is just to stay open to it and to listen to as much of their other music as you can and to just practice your part. But the biggest thing for me is when you get in the room with the other musicians, that’s when it starts to really come together and you can really delve into it.

During your time in Australia, have you found yourself playing much Australian music? Is there anything you find particularly unique or enjoyable about Australian classical music?

So, yeah, it’s nice to be – to have that kind of experience. I’ve been playing Australian music for a long time. Paul Stanhope, Brett Dean, Peter Sculthorpe, Matthew Hindson, Elena Kats-Chernin, it’s really – it’s lovely to be able to play something new as well. So, Gordon Kerry, I’ve never played anything by him.

So, yeah, it’s – it’s great though. I seem to have just, kind of, gotten involved with Australian music, and, you know, I love it’s freshness. It’s got it’s own sound world. Sometimes the composers weave the sounds of nature in there. Other times there’s just a rawness of energy and I think it’s just got a lot of variety, so, yeah. And a challenge.

What are some of the differences between playing flute in large orchestral settings and in chamber music settings?

Yeah, it’s different, it’s like apples and pears. When you’re in an orchestra you’re often performing a specific function. So, it could be a bigger canvas; you might be emphasizing a grand gesture; you might be supporting a solo vocal line in opera, so often the flute gets to sing along with the cantabile line that – we support that. Sometimes it’s just an effect.

Also, because it’s chamber music, you can feel like you’re very close to the musicians when you’re in the audience and, vice versa, you know, there’s an energy that the musicians take from the audience, too. So, it’s – it’s definitely reciprocal, which is cool.

Really looking forward to this next program. Interesting music.

So, the concert is on Saturday May the 22nd at the Sir John Clancy Auditorium UNSW. It’s called While the music lasts and it starts at 8pm.