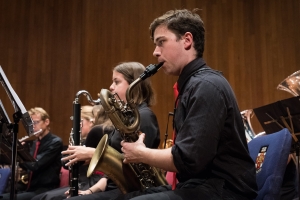 The saxophone has been described as the sexiest instrument ever invented. Today we’re catching up with UNSW Wind Symphony saxophonist Lynx van den Brink to see if it lives up to the hype.

Lynx van den Brink: And I think that just, like, stuck in my head, like “UNSW, they’ve got it going on.” [laughs]

Alex Siegers: With its sassy and seductive sound, the saxophone has been described as the sexiest instrument ever invented. Today we’re catching up with UNSW Wind Symphony saxophonist Lynx van den Brink to see if it lives up to the hype.

How has the saxophone influenced your Sonic Arts major?

But then, again, like you said, how saxophone, saxophonists, kind of,  live in that world between classical and jazz, I feel like the stuff that I have made is, like, neither classical nor jazz, or like... It’s sort of weird, like, yeah. I definitely say what I’ve, kind of, really enjoyed making has been, sort of, I suppose, ‘sound art’.

Tell us about your exchange to The University of Edinburgh.

LVDB: I would 100% recommend that everybody go on exchange. It was awesome. Like, probably the best 6 months that I’ve had in my whole degree. It didn’t seem there was, the, sort of, to such an extent, a lot of music ensembles to be a part of. I don’t think I, kind of, looked extensively into it but there wasn’t, kind of, a wind symphony or an orchestra for just, sort of, anybody to be a part of.

What led you to a combined Engineering and Music degree at UNSW?

LVDB: I think from about Year 9 or Year 10, I think, I remember coming up to Sydney for, I can’t remember what we came up to Sydney for but we went to see the Count Basie Orchestra play at the Sydney Opera House. And, I think I remember, I don’t know if it was during or afterwards I was just like “I want to do that. I want to play music” so it was like, from that point on it was like “OK, I’m gonna go study music at uni” and then it was, sort of, “Oh, I should have, like, kind of, a back up. What’s something that I could do in case the music doesn’t, kind of, work out?” And, so, it went from being Science, to, then to Engineering. So, it was [laughs] it was one of those things.

But I think also, like, what, kind of, drew my attention to UNSW, was, I remember, cause we have a - in Merimbula there’s the Merimbula Jazz Festival every year and I’m pretty sure one year the UNSW Jazz Orchestra was down playing. So, I remember seeing them and being like “Wow this is awesome.” “That’s so cool!” And I think that just, like, stuck in my head, like “UNSW, they’ve got it going on.”