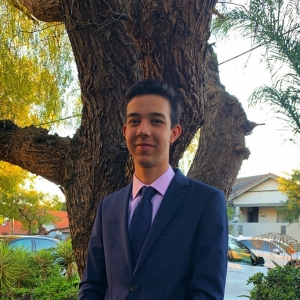 Oliver Jackson: And so often people do ask why I play the tuba, out of all the instruments, cause it’s massive and it’s very cumbersome, and I won’t lie, it’s an absolute pain to get around to orchestras and rehearsals.

Alex Siegers: Oliver Jackson has been making his mark during his short time here at UNSW. Currently in his first year of his Bachelor of Chemical Engineering, Oliver also currently plays tuba with the UNSW Orchestra and the UNSW Wind Symphony.

OJ: So, I must say that, 2020 has definitely not been the university first-year experience that I was expecting. Unfortunately, I only managed to make it to about 4 or 5 UNSW Orchestra and UNSW Wind Symphony rehearsals before COVID-19. And I must say I was pretty devastated that I never got to play the tuba solo from the Barnes Wind Symphony because tuba solos are pretty rare. Nevertheless, in just the first few weeks of SOAP I was able to meet a lot of other first years, make a few friends, and reconnect with some old buddies from SYO (Sydney Youth Orchestras).

OJ: During Term 1 as well, there were a lot of online activities and initiatives such as the online digital concert series or #KeepTheMusicGoing where I performed a tuba solo with my brother playing, accompanying on piano. So SOAP, I guess, has helped me to use music as a distraction from studies, and everything else that is going on in the world, and it’s an opportunity to be creative and spend time practising and performing, which I guess I was finding hard to find the time for before COVID-19.

OJ: And so often people do ask why I play the tuba, out of all the instruments, cause it’s massive and it’s very cumbersome. And I won’t lie, it’s an absolute pain to get around to orchestras and rehearsals. But I started high school and my school said they needed a tuba player, and I said, “Yeah, sure, why not?”, and I never thought at the time that I would end up taking tuba as seriously as I ended up doing. But the tuba, it’s such a powerful instrument, and as I played and performed it, I really began to appreciate it. So, it can produce this massive sound, that can fill an entire concert hall. But at the same time, it can produce soft, lyrical melodies that can be absolutely beautiful. So, I guess if you’re thinking of starting of musical lessons, just take the leap of faith like I did in year 7 and just do it, and you never know where music is going to take you. And music’s not easy and it’s incredibly hard, and it will take hours of practice, but I think you’ll find that it’s worth every single minute.

OJ: Yeah so just in the first few weeks of SOAP I definitely noticed there was tonne of engineering students in the UNSW Orchestra and UNSW Wind Symphony. And I don’t think there is one particular reason for this. Engineering is so wide and encompasses so many different areas. But I think, broadly speaking, it’s maths, physics, chemistry, science. And when you’re analysing music, you really come to appreciate that math has as foundation, sorry, music has a foundation of math. And I remember doing a composition last year that ended up being incredibly mathematically based. So, I think engineers can relate to the mathematical and scientific side of music. But also, at the same time, music is about collaboration and teamwork, about fostering a sense of community and engineers love working in big design projects, designing, building, solving real life problems. So, I think they are two of the things that draws engineers to music.