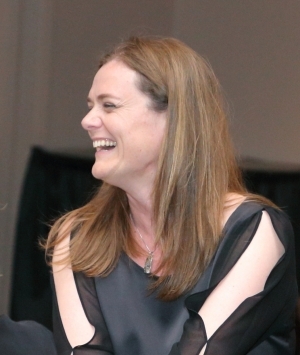 “Is that something Yvette could do?” My immediate response to Paul Goodchild’s question back in 2010 was “absolutely”, when he curiously enquired about our part-time role of Operations Assistant in the Music Performance Unit. Like most, I knew Yvette to be a top-shelf viola player, having been part of the Sydney Symphony for 11 years and a frequent guest artists with the Australia Ensemble UNSW. Yvette was also a regular face in the orchestra with the Collegium Musicum Choir, so was very much a familiar face to us all. The move to music operations seemed an unusual one for such an accomplished musician, but the role turned out to be the beginning of an amazing broadening of skills and change of Yvette’s life which has been a wonderful asset to us all.

The recent impact of the pandemic on universities has been well-documented, as was the announcement of anticipated job losses at UNSW. Yvette is taking this opportunity of a changing environment to step out of her role with the MPU, which in turn provides an opportunity for us to brieﬂy reﬂect on her contribution and celebrate her varied career.

We recently released to our subscribers the video of a concert back in 2011, including the premiere of Barry Conyngham’s Showboat Kalang, in which Yvette performed in place of Irina Morozova who was on leave. As one might imagine, performing at this level takes a lot of preparation, dedication, and time. While not rehearsing and performing, Yvette was busy in the oﬃ ce, managing guest artist contracts, running the box oﬃ ce, dealing with members of the choir and orchestra, and making sure all of the details of concert making were attended to. When she ﬁrst arrived in the MPU, Yvette didn’t know that photocopiers could magically sort into booklets or how to mail merge a letter to a giant list of recipients, but she quickly adapted, and learned an enormous range of new skills. The qualities which have enabled her to succeed in these roles are far less easily learned - Yvette is generous and always keen to help; she is responsive and empathetic; she is determined, humble, she listens, and has a fantastic and at-the-ready laugh. Some of you have come to know Yvette quite well over the years, and may miss that very personal interaction which she recognises as really important to keeping the organisation going. When all the world seemed to be going online, Yvette was always the champion of those for whom technology might be too great a challenge, and sought other ways to look after them.

Yvette has been a wonderful colleague to all those who have worked with the MPU over the past twelve years including our many guest artists, and a mentor to many young artsworkers who have moved through our workplace. We all wish her well as she moves on to new adventures, and shares her generous spirit with other people fortunate enough to cross her path.