Our Support Of The Arts, Uniken, 13 October 1989 | Music Performance 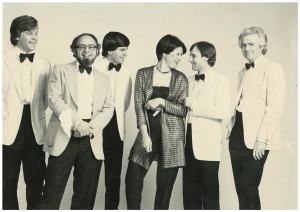 We recently happened upon this Uniken article from 1989 written by the then Vice-Chancellor Lindsay Michael Birt AO, CBE, BAgrSc BSc PhD DPhil Hon.LittD Hon.LLD Hon.DSc 1981–1992. The Vice-Chancellor clearly places the Music Performance Unit, the Art Unit, and other creative initiatives at UNSW as non-curricular and extremely valuable parts of the campus experience.

It seems to me.... An occasional column by the Vice-Chancellor

It may well be the case that students coming to study at our University believe they are here for the degree alone. And certainly, we are in the business of providing education which will prepare our students to enter a profession. But we are concerned with more than that.

I agree with Professor David Tunley, Head of the Department of Music at the University of Western Australia, who sees universities as having a role in the community that goes beyond the traditional academic responsibilities. He claims "university patronage of the arts can forge some of the strongest links with the community . . . through the arts, the university and the community can be brought together for the benefit of each other”.

Professor Tunley, who surveyed Australian universities, is careful to draw the distinction between true university patronage and the patronage of private individuals who have donated to universities. "As I see it," claims Tunley, "to qualify for the accolade ‘patron of the arts’ an institution must be prepared to put some of its own funds towards them, and not merely act as a clearing house for bequests and gifts."

Slating that only a few universities have on-going schemes which are funded primarily from university sources, Tunley includes our University among those few, drawing particular attention to our extended support of music.

"Undoubtedly, one of the most impressive artist-in-residence schemes is at the University of New South Wales which has been the patron of the Australia Ensemble for over a decade. Professional chamber music ensembles have been established at a few universities in the past. . . What distinguishes the Australia Ensemble from the others is that the six members have no teaching commitments at the University . . . The musicians are appointed primarily to rehearse and to perform.

“That the Australia Ensemble has become the country's leading chamber music group with an ever growing international reputation must be a source of much pride to the University of NSW which has made the existence and the success of this group possible by providing the musicians with a regular income, and its own concert manager, and of course a fine place for its rehearsals and concerts. The accolade ‘patron of the arts' is richly deserved by the University of NSW on that score alone. In addition, the same institution is the primary supporter of the University of NSW Opera which, established in 1966, specialises in the production of new Australian or less well-known 17th and 18th century works."

These are warming words of praise. Formed in 1980 and known then by the more parochial title of the University of New South Wales Ensemble, the Australia Ensemble has indeed proved itself to be Australia’s finest chamber group. Providing a regular subscription series for audiences in this country, they have also toured in Europe, New Zealand and the United States. They have a tour planned for January 1990 which will include Italy, Germany, the USSR and Portugal. Having recently released the recording Songs and Instrumental Pieces of Dallapiccola, another of their recordings, a selection of Schoenberg and Berg music is due for release at the end of the year.

University staff and students are treated to concerts by the Ensemble on campus grounds, as pleasant lunch-time interludes and evening performances.

The University of NSW Opera to which Professor Tunley refers has also had an illustrious existence. Formed in 1968, it has undertaken more than 50 productions, including many first performances of Australian works. Directed by Professor Roger Coveil, Head of the University’s Department of Music, the Opera has conducted two overseas tours and was the first Australian opera company to perform abroad. It has won a prize for its recording of Edward John Eyre by the Australian composer Barry Conyngham.

Patricia Brown, also from our Music Department, has been responsible for forming the Collegium Musicum Choir which consists almost entirely of past and present students and staff of this University. Now in their 15th season, they recently regaled audiences in the Clancy Auditorium with Bach's St John Passion.

A new addition to the musical line-up on campus is the University Orchestra. Formed at the beginning of this year, it is primarily composed of students with, I believe, two academics included in the fold - a physicist and an econometrician.

Music, of course, is not this University’s only claim to fame.

The University has a special relationship with the National Institute of Dramatic Art (NIDA). Established jointly by the University, the Elizabethan Theatre Trust and the Australian Broadcasting Commission in 1958, NIDA is an autonomous organisation with a board of its own and government funding. Despite its independent status. NIDA is considered a ‘guest’ of the University. Space has been given on campus for the NIDA Theatre and the University bears some of the costs of administration of these buildings.

Since 1983 the University has had a writer-in-residence scheme. The writer is usually located in the School of English and those who have taken part include poet Les Murray, short-story writer Frank Moorhouse and novelist Kate Grenville. Writer-in-residence during 1989 has been Mark O’Connor, whose writings concentrate on environmental issues.

Last year a University of NSW Literary Fellowship was awarded for the first time. Funded by a grant from the 'U' Committee, the inaugural fellowship was given to Alex Buzo.

A stroll through the grounds and buildings of the University will reveal items from our sizeable art collection. Probably the better known works in our collection include Mona Hessing's bright wool and silk tapestry in the Clancy Auditorium and John Coburn’s tapestry of the Garden of Knowledge in the Science Theatre - both venues frequented by staff, students and visitors.

Recently appointed as the University's first art curator, Katrina Rumley comes to our campus from the new Parliament House where she was responsible for establishing that collection. Ms Rumley is keen to add to our sculptural works and hopes that rather than purchasing existing items, the University will look to commissioning works and perhaps become involved in an artist-in-residence scheme.

While we strive to maintain academic standards, we attempt through our support of the arts to entertain, delight, inspire and provoke our students and the larger community.