So, You're A Bassoonist | Music Performance

So, You're A Bassoonist 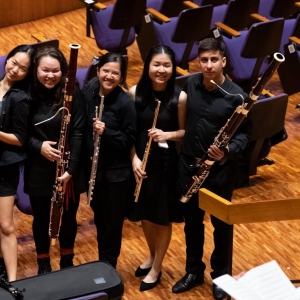 The bassoon is one of the most difficult instruments in the orchestra to play, but has become the butt of musical jokes, featuring prominently in the theme music of Leave It To Beaver, represents the grandfather character in Peter and the Wolf, and scores Mickey Mouse's misadventure with the dancing broomsticks in Fantasia. UNSW Wind Symphony and UNSW Orchestra have a small but dedicated team of stellar bassoonists who know that, while the bassoon can be bouncy and silly, it can also be jazzy, romantic and altogether serious.

Nicholas Zengoski is in his third year of a Bachelor of Actuarial Studies. This is his third year playing in UNSW Orchestra, although the last time he played was 2016, while completing his Bachelor of Music on bassoon also here at UNSW.

Why did you choose to play the bassoon?

I initially resisted playing bassoon because I liked the clarinet so much and had never really considered it, but after some persuasion from my teacher I finally picked up bassoon in Year 9 and never looked back. And 10 years later I feel like I made a good choice. 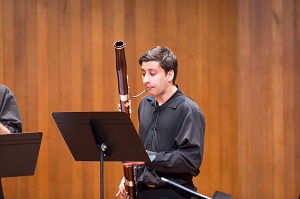 Why do you think the bassoon isn’t more popular?

The bassoon has a few major barriers to entry that hinder its popularity, mostly that it is difficult, large and expensive. By the time a young person is old enough to seriously consider learning bassoon they've often already picked another instrument (as I almost had) and being very closely related to the baroque dulcian (very old instrument), a lot of the fingerings are a bit archaic and complicated compared to other instruments. Not to mention the cost being much more than most other band instruments. So, the bassoon can often be seen as not worth the investment, but just like with any other instrument, with a little consistent practice it's just as easy to get the hang of and share in the bassoony rewards.

What is your favourite work featuring the bassoon?

There are so many that I could name as iconic, but as a fan of modern music, a favourite of mine is Tomasi's Concerto for Bassoon and Chamber Orchestra, which I was lucky enough to perform live in a recital with piano at the end of 2020; it uses the full range of pitch, articulation and tonal quality of the bassoon to paint so many different haunting or playful moods throughout it. It was spectacularly recorded by Mathias Racz, who over a few albums has also recorded most of the other landmark classical and modern bassoon concerti, which are all well worth the listen to anyone who loves the bassoon and really wants to hear what it can do.

If you didn’t play bassoon, what other instrument would you like to play and why?

I started out my musical journey on the clarinet and played it for many years, and a jazz teacher at my school offered me a tenor saxophone in year 12 to figure out how that works too, since then I've played many musical Reed 5 books over the years which have needed all 3 instruments, including all the saxes and multiple clarinets. Being somewhat related to the bassoon in embouchure, I'm not awful at the oboe. And if we loosen the definition of "plays" a little further, then I can also play trombone, bass guitar and keyboard to a basic primary school band standard.