So, You're A Flautist? | Music Performance

So, You're A Flautist? 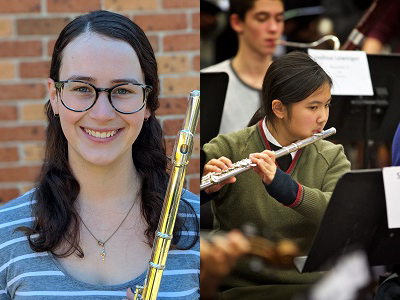 Megan Amos (left) is a sixth year combined Bachelor of Music/Bachelor of Science (Chemistry) student, who will be commencing Honours in 2022. This is her third year playing in UNSW Wind Symphony.

Sabine Seeto (right) is a second year combined Bachelor of Electrical Engineering/Masters of Biomedical Engineering student. This is Sabine's second year in an ensemble; she played in Wind Symphony in 2020 and then joined UNSW Orchestra in 2021.

Why did you choose to play the flute?

Megan Amos: Piano was actually my first instrument and I didn’t start playing flute until Year 10 when my high school started up a concert band. I really wanted a challenge and the flute parts sounded really difficult! It wasn’t until I started at UNSW and got a flute teacher that I really committed to the idea of studying music and I switched to a double degree in my 4th year.

Sabine Seeto: I actually started on the violin, and found I wasn’t all that amazing at it, so I wanted to try something different. I decided to try out a wind instrument and picked flute because my cousins played it. So I gave that a go and took it up quite well and haven’t looked back since.

Why do you think flute is so popular? 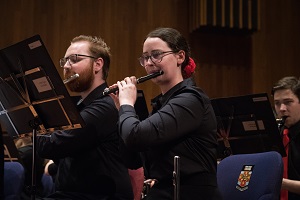 Megan: Well firstly it just sounds so beautiful! I think many people are drawn to the flute because it gets some of the most famous and melodic solos in orchestral repertoire. The flute is also once of the oldest instruments so it has had centuries to develop a large solo repertoire, similar to other instruments like violin and piano.

Sabine: I think if you asked people outside the music field what the first woodwind instrument they think of is, it would probably be the flute. Since it’s a pretty high pitched instrument, the flute sound tends to sit above (or stick out) from the rest of the instruments in the orchestra, so it’s pretty recognisable. I think flute has had some pretty solid exposure throughout history, not just in western music, but also in eastern style music, with its own music and flute styles. I also think in comparison to the other woodwind instruments, flutes can sometimes be a bit more affordable, there’s no additional cost of reeds.

What is your favourite work featuring the flute?

Megan: Honestly I don’t know if I can pick just one piece, what a difficult question! I would have to say one of my favourites is a flute duet called ‘Maya’ by Ian Clarke, which I was lucky enough to be able to perform with my friend Andy (also a UNSW Wind Symphony member) a few years ago. My favourite flutist is definitely Emmanuel Pahud, his technique and tone is just unparalleled.

Sabine: Favourite work would either be the Chaminade Flute Concertino or Maya for two flutes and piano by Ian Clarke.

If you weren’t a flautist, what other instrument would you like to play and why?

Megan: As many as I can! I actually love the challenge of learning new instruments – it’s one of my future goals to be a woodwind doubler so I’ve been learning clarinet and saxophone. I was learning percussion in my community wind symphony pre-COVID, so that’s something I’d like to continue when I get the chance. Also it’s my dream to learn the oboe at some point but I think that will be a long term goal, there’s only so many hours in a day!

Sabine: Probably oboe, or some less commonly played instrument. I spent most of high school playing oboe parts in orchestra and chamber ensembles because we had too many flute players and not enough oboe players, but oboe is a pretty cool instrument with a really distinct sound. Might have thought about bassoon but I have pretty tiny hands so not sure how that would have worked out.