So, You're An Oboist? | Music Performance

So, You're An Oboist?

Both the UNSW Orchestra and UNSW Wind Symphony have a small team of oboe and cor anglais players. You will hear the oboe's distinctive sound, bright and penetrating, right from the beginning in the orchestra's tuning note of 'A' played to the rest of the ensemble.

Florence Chou plays 1st Oboe in UNSW Orchestra. She is in her second year of a combined Bachelor of Music/Bachelor of Arts. This is Florence's third year in the UNSW Orchestra. Florence took a year off from studying in 2020, (also her first year since 2012 not participating in Sydney Youth Orchestras)  but continued with UNSW Orchestra to maintain her oboe chops and hang out with her friends.

How long have you been playing the oboe?

Florence: I've been playing oboe since 2010 through my school's band program. I didn't initially know what an oboe was and picked it based on the name! I also can play piano but as more of a hobby.

Katia: I’ve been playing the oboe for seven years, and I love it, it’s a such beautiful instrument! I also play Cor Anglais, which I’ve been playing for about three years. I’m also a pianist and have been for the past 16 years. 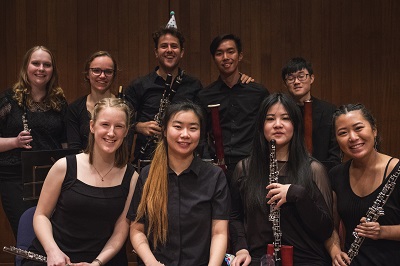 Are there any myths about playing the oboe?

Florence: I'm honestly not too aware of many myths about the oboe myself. The main thing I've heard is that it's considered a 'difficult instrument', but I don't think it's any harder to master than any other instrument. It definitely requires a certain level of commitment, both physical and mental, but whatever instrument you play shouldn't change that.

Katia: People get it confused with bassoon, but it’s definitely not the same. Also playing the oboe is not easy- it places the same pressure on your diaphragm as going underwater so respect the oboists!

In your opinion, what is the most challenging thing about being an oboist?

Florence: The most challenging thing for me as an oboist has been becoming comfortable with playing solos, particularly in an orchestral setting. I'm lucky enough to play an instrument that has a great deal of gorgeous soloistic material, but nerves have often gotten to me when I've had to play these parts. It's been an unavoidable obstacle but I've learned to focus more on enjoying what I'm playing rather than focussing on my anxiety.

What is your favourite recording featuring the oboe?

Florence: My favourite recording is probably Eugene Goossens' Oboe Concerto in One Movement, performed by Emily Pailthorpe and Julian Milford. It's the most enjoyable performance I've come across and is most likely my favourite piece of solo repertoire I've played.

Katia: There are so many beautiful recordings it’s so difficult to pick! If I had to pick a concerto it would be the Vaughan-Williams, simply because it’s so elegant in showing off everything stunning about the oboe. In terms of orchestral works, I would choose the solo for Cor Anglais in Ravel’s G Major Piano Concerto or Rodrigo’s Concerto for Guitar and Orchestra.