So, You're A Trombonist? | Music Performance

So, You're A Trombonist? 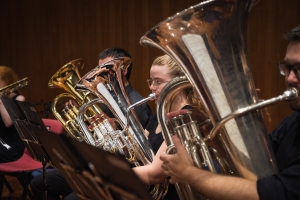 There are over 100 students, staff and community members in our Large Instrumental Music Ensembles at any given time. Each month we will be introducing you to a new section of our ensembles. 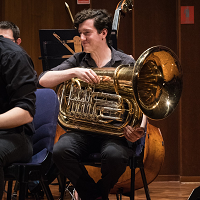 Christian Sherlock, Tuba, Trombone & French Horn, UNSW Wind Symphony & UNSW Orchestra: Christian is in the 4th year of his PhD in Biological Systematics and Phylogenetics, and his 8th year at UNSW. Christian has been in UNSW Wind Symphony for 4 years, playing any combination of tuba, trombone, French horn and trumpet (not at the same time). In 2021 he joined UNSW Orchestra on trombone. 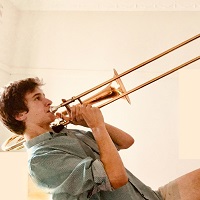 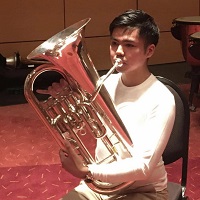 What is the role of your instrument in a large ensemble like UNSW Orchestra or UNSW Wind Symphony? 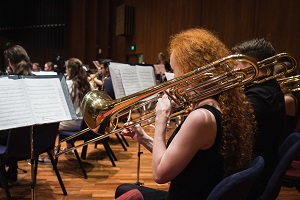 Christian, tuba: The role of the tuba in UNSW Wind Symphony is basically bass for the whole band. Since we don't have any permanent double bassists, contrabass clarinetists or contrabassoonists, tuba is the lowest instrument. As the lowest instrument, the tuba also has to provide the tuning note, which is always a good ego boost. Playing in an orchestra, tuba is just a low brass sound, but in a wind band you're the go-to bass, so there's not nearly as much counting rests and you get a lot of good parts.

Ed, trombone: In UNSW Orchestra, the role of the trombone can vary quite significantly, depending on the repertoire. For example, in music from the Classical period, the trombone, generally, has a harmonic function, to add depth to the tone colour of the orchestra. Whereas, in Romantic period music, the trombone is employed with much more complexity, across pitch, dynamics, rhythm, and, arguably most importantly, adding it's brassy timbre.

Michael, euphonium: The fascinating thing about the euphonium in UNSW Wind Symphony is how versatile it is. Oftentimes the euphonium functions as a fourth trombone, adding warmth to the trombones’ bright sound. It can also commonly be heard doubling the tuba parts an octave higher and hence providing more clarity to bass lines. Beyond that, the euphonium can function as a fifth horn to add depth to the French horn section, or double the trumpet or woodwind melody lines an octave down. It’s also sometimes used as a solo instrument in wind ensemble pieces. Although there is very few orchestral works that call for the euphonium, when it does get included, it is most often used to play solos.

What sets lower brass players apart from other musicians? 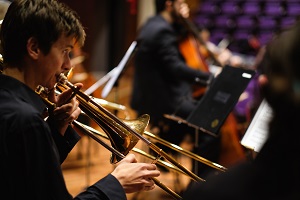 Christian, tuba: Tuba players are usually extremely chill, and typically pretty reliable, since you're playing such an important part of the band. I'm not sure if I've ever met anyone who started on tuba, though - normally we're all migrants from other brass instruments, like me coming from trombone as a first instrument. Tuba players also usually own large cars and are always asking if there's parking near the venue, not sure if that's related.

Ed, trombone: Trombones are infamously different from any other musical instrument for their slide, which although at first appears fun, can be quite difficult in terms of playing exactly in tune (and also playing with lots of fast notes). This can be a disadvantage but at the same time, an advantage since we can quickly adjust if we are slightly sharp or slightly flat.

Michael, euphonium: Euphonium players can oftentimes be shrouded in an air of mystery as their instrument is relatively unknown. Because the eupho is not often seen in orchestras or big bands, it is not as recognisable among non-musicians as a flute or cello, for instance. I get questions all the time from other people (and even orchestral musicians) wondering what a euphonium is! Every eupho player in existence has had a phrase up their sleeve to describe their instrument to the uninformed, oftentimes describing it as a “small tuba”.

Fun fact: euphonium is a Greek word for “beautiful sound”!

What is your favourite piece or genre to play on your instrument? 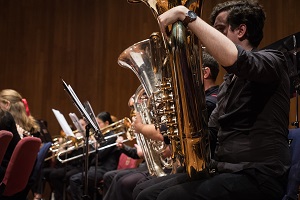 Christian, tuba: Since the tuba the main bass instrument in a wind ensemble, you get all the good bass parts, and you sometimes even get things which are challenging and engaging. That said, I do believe tuba truly shines in comedic music, and the tuba I play at the moment has had a couple of starring roles in shows I've played.

Ed, trombone: Trombones are renowned for their unique ability in jazz music, so I’d have to say my favourite genre on trombone is jazz. But I do really enjoy playing in large ensembles. In fact, I love marching band and fanfare type music – it always has great trombone parts (we get to play really loud, and they are mostly written in really nice key signatures)

Michael, euphonium: I think every euphonium player out there would enjoy playing Gustav Holst’s concert band suites. Holst seemed to know how to write for the instrument, likely having heard it in his local brass band. In particular, the first movement of Holst’s Second Suite has one of the most famous solos in the eupho repertoire.

"The biggest pro of playing trombone must be playing loud, I love it" 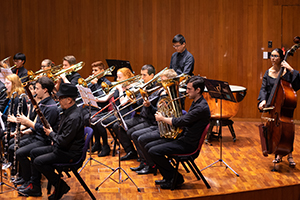 Christian, tuba: The biggest pro of playing tuba is probably getting good bass parts to play, and there's always something very satisfying about playing really, really low notes (though that may just be the tuba player in me). The biggest con is definitely the living nightmare that is tuba transport. Sometimes I wish I played piccolo (not often though).

Ed, trombone: The biggest pro of playing trombone must be playing loud, I love it.

In certain music we often have a lot of rests (and a lot of counting), which is a con of being a trombonist, but it means when we do play it becomes even more special and it’s hard to resist the urge to make yourself heard. Another con of the trombone which many people wouldn’t think of, is looking after and maintenance of the instrument. Firstly, the slide needs to be constantly greased and sprayed to make sure it moves as smoothly as possible. Secondly, it is quite easily to bang the slide against objects and dent the slide, which considerably impacts its function.

Michael, euphonium: The best part of playing the euphonium lies in how interesting and varied concert band parts can be. In slower pieces, a euphonium player may play sweet and lyrical melodies that take advantage of the instrument’s warm, dark, and round tone colour. On the other hand, in marches, the euphonium might play fast and virtuosic passages featuring rapid scales and wide leaps that harness the instrument’s incredibly wide range and agility.

That’s why I personally hope that one day the euphonium can find a permanent place in the orchestra, complementing the ensemble with its sweet and versatile sound, and bridging the gap between the trombones and tuba. It may take decades or even centuries before that can happen, but I think the future is looking bright! In 2015, Japanese animation studio Kyoto Animation released Sound! Euphonium, an animated TV series centering on a high school eupho player learning to love her instrument. The anime series, alongside a growing euphonium community on YouTube, is helping promote the instrument around the world.