So, You're A Violist? | Music Performance

So, You're A Violist? 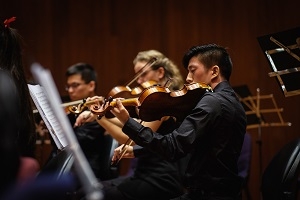 UNSW Orchestra has a team of dedicated viola players. Often mistaken for the violin, it's the viola's timbre that sets it apart: its rich, dark-toned sonority is more full-bodied than the violins and its mellow voice lends it well to playing inner harmonies.

Jason Kong is in the 4th year of a combined Bachelor of Music/Bachelor of Engineering. He has been playing with UNSW Orchestra for all four years that he has been at UNSW.

Lara van den Dolder is in the 2nd year of a combined Bachelor of Music/Bachelor of Media (Screen and Sound Production). This is her second year in UNSW Orchestra.

How did you end up playing the viola?

Jason: Unlike many other viola players, I went straight into viola through compulsory group lessons at school. Honestly, I played it because my friend played it, and then they stopped playing… Too bad for them though, I was able to experience many amazing opportunities in ensembles performance because of that catalyst.

Lara: Like many viola players, I started on violin. Before viola I had been playing violin for about 10 years before being given a viola. I was auditioning for the Arts Unit orchestra on violin when the panel made a comment about becoming a viola player. Naturally, I thought they were joking. They were not. Sure enough I was given a spot in the orchestra on viola, and so I began learning in 2019.

What is something that people don’t know about the viola?

Jason: I think most people don’t know about the viola full stop. If I were to describe it, it would be a small cello. It has the same pitches on its strings after all.

Lara: It’s harder to play than a violin in ways I didn’t initially expect. The bigger size and lower notes mean you have to use a lot more weight in your bow than with a violin. An of course you have to read alto clef, which I’m still not great at.

What piece you would love to play?

Jason: I would love to be able to play the Bartok viola concerto one day. It’s a piece that showcases not only virtuosity but encourages musicality and individual interpretation.

Lara: I’m a big fan of Tchaikovsky and in particular his ballets. Getting the chance to play either Swan Lake or The Nutcracker in an orchestra would be amazing.

If you weren’t a viola player, what other instrument would you like to play?

Jason: If I ever got the opportunity to learn the organ, that would be a tick off the bucket list, but a more feasible option might be the bass guitar.

Lara: I’ve always thought that percussion would be fun to play, but I’ve never tried it and I’m not the most rhythmically-coordinated.