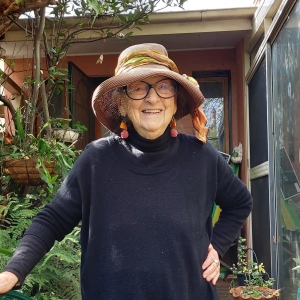 It was no surprise to us to learn that one of our subscribers has an amazing life story, as we suspect is the case for many.

When the Australia Ensemble UNSW was asked to be involved in the celebration of the conferral of an Honorary Fellowship for founding subscriber Mrs Norma Disher Hawkins, we jumped at the chance.

Some of you will remember Norma as the supporter of commissioned work by Ian Munro, Three Birds, premiered with David Griffiths, Julian Smiles and guest artist Sara Macliver. There are many more parts to Norma’s contribution to the arts, to social justice and to UNSW, which is celebrated in this special presentation.

Members of the Australia Ensemble UNSW perform works by Vine, Tchaikovsky, Grieg and Beethoven, and join in the celebration of Norma’s conferral with UNSW Chancellor David Gonski AC. Congratulations Norma!

Ladies and gentlemen, it gives me great pleasure, on behalf of the whole of the University of New South Wales community, to address you during this special Australia Ensemble performance. I would firstly like to acknowledge the Bedegal people who are the traditional custodians of this land on which the university stands, and we pay our respects to the elders both past and present.

Established in 1980, the Australia Ensemble UNSW is widely recognised as this country’s finest chamber music ensemble. Today, they are honouring and celebrating one of their first subscribers, Mrs Norma Disher Hawkins as she receives a UNSW Honorary Fellowship.

COVID-19 pandemic restrictions prevent us from gathering together to celebrate this wonderful milestone. This is in no way diminishing the occasion and I am thrilled that we are able to honour Norma in this special way.

I will now read, if I may, the citation.

Norma Disher Hawkins was born in 1922 in the small rural town of Bega on the far south coast of New South Wales. She was the eldest child of Melbourne Joseph Disher who was a skilled coach builder, wheelwright and carpenter. He mother Euphemia Douch worked in a drapery shop in the town. She was a very fine seamstress, she made clothes for Norma and her two brothers, and she taught her daughter to sew.

Norma’s memories include from her early childhood visits to listen to music at her grandmother’s house opposite, where her uncle Bob, who was also her godfather, had a gramophone and a collection of recordings of classical music. Norma’s favourite was Bizet’s Carmen.

Her favourite subjects at St. Patrick’s Primary School were History and English where, at the age of 13, she discovered Joseph Konrad and Shakespeare’s A Midsummer Night’s Dream. At 14, following the death of her mother, Norma moved to Sydney. She completed her schooling aged 15 with the Intermediate Certificate at St. Mary Magdalene High School in Rose Bay, where Twelfth Night had made a lasting impression.

After completing two short tech courses in dressmaking and millinery, Norma decided she wanted to work where there was music. She obtained a position in the music library at radio station 2SM, where she remained for 7 years as the librarian. During this time she discovered the City Municipal Library at the QVB. She queued for organ gallery seats to symphony concerts and recitals at the Sydney Town Hall, and attended plays at the New Theatre in Castlereagh Street.

When she saw there, for the first time, the plays of Bernard Shaw, Sean O’Casey, Moliere and contemporary playwrights from America and England, she discovered the connection between art and politics.

She also discovered that here was a place for her to be actively involved. In 1949 she joined New Theatre, and for the next 28 years she interpreted and made costumes designed by artists Cedric Flower, Les Tanner, Rod Shaw, David Milliss and Yvonne Frankart. In the absence of a designer she herself would do the necessary research and creation.

It was in the 60s that she attended most of the productions at the Old Tote Theatre here at the University of New South Wales campus – and at the time the New Theatre was welcoming graduates of the National Institute of Dramatic Art, NIDA. As well being a member of New Theatre Production Committee and a Play Reader, Norma was involved in four plays, two as Associate Director and two as Director. It was in 1977 she costumed Shakespeare’s The Merry Wives of Windsor and The Captain of Kopenick. It was also at the New Theatre that Norma met Bruce Hawkins, a lecturer in the Faculty of Engineering at UNSW, and they later married.

Norma’s work at New Theatre with Jock Levy and Keith Gow, both theatre directors as well as members of the Waterside Workers’ Federation, led her to become the third member of the production team of the newly-formed WWF Film Unit. During the next five years 13 films were produced, focused principally on union history and, importantly, on safety measures for union members. The films are esteemed by contemporary filmmakers and are held by the National Film and Sound Archive.

Norma met Margaret Barr in 1953; she was to become the first Movement Director at NIDA, and had established a dance drama group, which included productions inspired by Australian themes, for example “Snowy”, “Colonial Portraits” and “Judith Wright”. Norma was immediately responsive to Margaret’s works and they formed a close friendship.

In 1987, Margaret chose as her major work for that year “People of the Maze”, based on the book An Indian Woman in Guatamala, by Nobel Prize winning writer Rigoberta Menchu. Norma found the existing Sydney Committee for Human Rights in Guatamala and was able to get their interest and support for this production.

After a successful season of the work Norma and her husband Bruce became active members of the committee. Their house in Glebe became a place for regular meetings, and enduring friendships were formed with an inspiring Guatamalan family and other committee members.

Bruce Hawkins died in 1998. The Bruce Hawkins Memorial Prize was based on the UNSW Alumni Awards which he so admired. The Prize was initiated by Emeritus Professor Gavin Kitching and financially supported by friends, and by Norma. It was presented annually from 2001 to 2012 with the aim of acknowledging the contribution of a graduate to the “quality of community life, particularly in fostering cross-cultural links and services, within and without the university”.

Norma and Bruce were founding members of the Australia Ensemble, resident here at UNSW, and regularly attended their evening and lunch hour concerts and performances by the Collegium Musicum Choir. When the need came to repurpose the Prize, Norma chose the Ensemble. She commissioned a work to the memory of her husband by its pianist and composer, Ian Munro. She has many cherished memories of recitals by the Ensemble, but the night of the premiere performance of Munro’s “Three Birds” has a special place in those memories.

Now aged 98, Norma looks forward with optimism and eagerness to the future of the Australia Ensemble, and to resuming her seat in the ‘Clancy’. When she opens her back gate in Glebe she walks into the John Street Reserve, now a habitat to encourage the return of blue wrens and other small birds, the result of the activities of the local Glebe community in which she has played such an active part.

The University Council, noting her eminent service to the arts, to social justice and to UNSW resolved that it would be fitting if an Honorary Fellowship were to be conferred on Mrs Norma Disher Hawkins.

In the name of the Council and by my authority as Chancellor of the University of New South Wales, it is an enormous honour to hereby award in absentia to Mrs Norma Disher Hawkins and Honorary Fellowship of the University.

I hope that she enjoys this honour, she certainly deserves it, and may she absolutely enjoy many, many years of active service in line with all the service she’s provided so far.