Three Dreams in Pulse - from the philanthropist's view | Music Performance

Three Dreams in Pulse - from the philanthropist's view 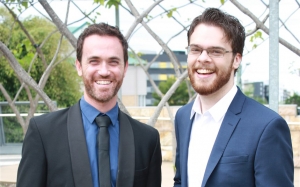 THREE DREAMS IN PULSE  - a world premiere commission by Andrew Ball for the Australia Ensemble in May 2016, dedicated to Catherine McCorkill

One of the best ways to exercise our democratic rights is via philanthropy and charity, for despite the careful decisions and budgeting, and transparent processes of our governments and arts grant awarding panels, not all worthy causes are funded, and not all valuable artists are recognised and supported.

When a story or piece of music strikes a chord with me, as a musician and philanthropist I look for opportunities to amplify the voice of origin – in this case, the compositions of Brisbane saxophonist and composer, Andrew Ball.  Naturally I will spruik his goods, perform his latest pieces, and in cases like this, having developed the greatest faith in his artistry, integrity, and productivity, I commission a landmark new work.

So it was that through the association with my mentor and friend, Catherine McCorkill, former Australia Ensemble clarinetist, the idea quickly germinated and grew into the writing of a new clarinet sonata for her to perform with Ian Munro.  We agreed that it should be of the scale of a clarinet sonata, and in a modern idiom.  For me, a key consideration was that it should be dramatic and grand, but both playable and enjoyable by clarinetists that were not necessarily virtuosic or professional, to add to the body of work of Australian music accessible to students for their recitals and exams, thereby simultaneously making the audience for Ball’s work larger.

Why is Andrew Ball’s style so significant and individual?  Well, there are many cases of artists with “no formal training” developing a special voice, and of people with some kind of alternative back story having unique insights.  Ball’s tertiary degree is in saxophone, and after graduation he felt ever-more compelled to compose for Barega Sax Quartet, in which he plays tenor saxophone.   From his experimentation grew a sound snugly suiting single-reed instruments that only an expert performer could craft.  In writing for other groups including Collusion and the Hourglass Ensemble, including prepared piano, strings, recorded speech and electronic filters, and many other forces, the clarinet or saxophone is always the star.  His writing faultlessly implies the way the piece needs to be played – the right amount of grunge, verve, and unforgiving modal energy, and the perfect measure of sweet, transcendent, crystalline spaciousness.

After many moons of planning, we have the new piece.  I’m sure Andrew is himself unaware of the irony that “Three Dreams” is the same title as Sydneysider Alan Holley’s clarinet sonata of some 20 years ago.  The essence of the work is rhythm and pulse.  The melodies, scales and chords are sparingly varied, acting only to serve a “rhythmic theme” in each of the movements.  In this respect many listeners will consider it a “theme and variations” of a melody, but Ball’s point is that a definition of music must recognise that pitch, tonality, rhythm, dynamics, timbre, tempo and silence are all equally important, and so while pitch is normally how we think of a theme, rhythm could be its replacement.

Each movement is inspired by, and re-appropriates, different rhythmic traditions, from old-school delta blues, to Korean Jangdan music, to Afro-Cuban clave.  Ball’s favourite way of elaborating on “rhythmic themes” is to make them stretch and contract in some parts while keeping the pulse in others.  This can be seen in many of his previous works for saxophones, clarinets and other instruments.  Observe a mind-bending trick for the performers, requiring the pianist to play initially in quintuple time, followed by an implied beat in quadruple, while the clarinetist stays in the original divisions.  With the uneasy, inexorable placement of pounding left-hand bass notes it's a delicate high-wire act that is thrilling to absorb!  I hope you will be there to experience the premiere and learn a new dialect of modern composition at the Australia Ensemble concert in May.

Three Dreams in Pulse by Andrew Ball, commissioned by Dr Andrew Kennedy, will have its first performance on Saturday May 14 in the Australia Ensemble's subscription concert Bright Young Things.