All About The Bass, With Andrew Meisel | Music Performance

All About The Bass, With Andrew Meisel 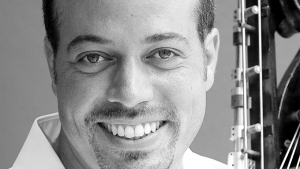 Andrew Meisel, double bass was born in Sydney and began his musical studies in double bass at 14. He graduated from the Sydney Conservatorium in 1996 after five years of study with Brett Berthold and in the same year was awarded a Big Brother Scholarship for overseas study.

Andrew spent five months in London under the guiding hand of Thomas Martin before returning home to take up a rank and file position with the Australian Opera and Ballet OrchestraOBO. His other teachers have included Timothy Cobb in New York, and Ed Barker in Boston.

In 2018 Andrew performed with the Australia Ensemble UNSW at UKARIA as part of the 2018 Adelaide Festival.

I first picked up a double bass at the age of 14 when a school music teacher started a beginner string group. My best friend and I thought it might be a bit of fun and we were right, it is!

"My best friend and I thought it might be a bit of fun and we were right, it is!"

It used to be rare that anyone took up the bass at an early age because there were no small basses. Now students can start on 1/12 size basses and start at a much earlier age. This has had a massive impact on the standard of double bass playing in a very positive way.

I completed my final 2 years of school at the Conservatorium High School and continued on to studies in performance at the Conservatorium. At age 19, I successfully auditioned for a permanent tutti position in the Australian Opera and Ballet Orchestra and five years later successfully auditioned for the position of Associate Principal with the same orchestra which is the position I hold today.

"I have also been fortunate to be able to perform with almost all major orchestras in Australia, New Zealand and Bergen, Norway."

I have been very fortunate to have had the opportunity to study with the very best teachers in Australia, the UK and USA. I have also been fortunate to be able to perform with almost all major orchestras in Australia, New Zealand and Bergen, Norway.

What do you like about Golijov’s Lullaby and Doina?

As a double bass player, performing the Lullaby and Doina by Golijov is not without its challenges but it is also an extremely rewarding and enjoyable piece of music to prepare. Within the variations of the lullaby the bass sustains long pedal notes and the challenge is to find the tone colours that fit with the Yiddish and folk like themes. The Doina finishes in a fast Gallop that is described in the music as “wild”. The double bass has a fast pizzicato section that exploits the rhythmic and percussive qualities of the bass that can so often be found in the Latin and Jazz styles of music.

Do you have a favourite Opera?

I find it very hard to narrow my favourite opera down to just one. I love alot of the opera repertoire for very different reasons. I would find it easier to pick favourite operas by composers. Verdi, Otello is such a complete piece of drama and the orchestral colours and harmonies so vividly describe the plot. Puccini, Tosca for being such a powerful piece of music with the colours of instruments being so closely linked to the voices. Strauss, Rosenkavalier is a marathon but performing it has been one of my very favourite musical experiences and the final ten minutes never fails to move me to tears.

"the final ten minutes never fails to move me to tears."

What attracts you to chamber music?

I think one of the most enjoyable parts of playing chamber music is being able to have eye contact with the people you are making music with. This is something that is not so easily achieved when performing in a larger ensemble. The challenge of adapting and reacting to small movements and nuances I also find extremely rewarding. Having the opportunity to perform with Australia Ensemble UNSW is something very special for me and makes up a large part of my most challenging, rewarding and memorable musical experiences. It is also something special to make music with friends.