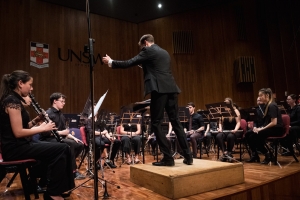 I hope this finds you safe and well. I certailny miss making music with you all, and I missed it even more as I put together these videos for you. I hope you find them helpful as you continue to prepare James Barnes' Third Symphony.

While there have been a number of orchestras across the world making their music more easily accessible, there have ben no similar announcements from professional Wind Symphonies. Thankfully, the music of many top groups is quite accessible:

United States Marine Band "President's Own" This site has a huge number of resources. Also see their youtube channel

Some of the top University groups include:

Some amazing Community Bands include:

To listen sprecifically to Barnes' Symphony No. 3, this is the best accessible recording of the work:

As I don't think it is ever wise to listen to just one recording of a work,

Here is another recording available on youtube that is uncredited.

...and here is a third by the Osaka municipal band

I challenge you to listen to great ensembles of al types and to listen to many soloists on your instrument... create a model sound in you mind by analysing many performers.