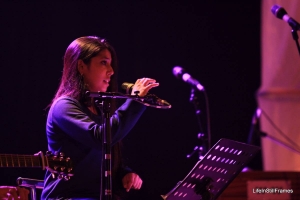 Alex Siegers: UNSW Masters of Architecture student and Senior Cultural Mentor Aashna Mittal is on a mission to find more Classical Indian music in Australia. Earlier this year she discovered Indian Link Radio, and took out first place in their ‘Super Singer’ competition, now she is excited for more!

Aashna Mittal: As an Indian student I would always try to listen to Indian music and since I’m trained in Indian Classical music I have more of an inclination towards Indian music and I would just try to find my own, make my own list and playlist while I was working and, ah –

Aashna Mittal: So one day, that aunt, she called me and she was like “This is a competition and I think you can win it.” ”You have great potential, just participate.” And yeah, I did call the next morning, I was so excited, “Oh, god, there is an Indian Radio!” Like, more than the competition, I was like “There’s an Indian Radio!” And, I guess, a lot of Indian students are not, like at UNSW, they’re not aware about the Indian Link Radio. So, yeah guys, there is a radio channel for Indian music if you are interested into that. And those who are not Indian as well, I know there are so many friends who like Bollywood and they want to hear music, you don’t have to juggle with finding the right playlist.

Aashna Mittal: And, ah, yeah, then the competition started. I went, ah, first, for top 15, then for top 6 and, yeah, then I was finally in the top 2. It was a very tough competition in the final top 2. “Oh god, I’m not gonna win” and finally she’s like, “Aashna was a bit better and, yeah, she’s winning the competition!” It’s – it was such a great moment.

Aashna Mittal: Ah, actually, it’s a really great thing for those who are international student and it’s like a close-knit family for me and, I guess, for many other students who have known Cultural Mentor Program. And basically it’s about helping the new international students who are, sort of, coming to Sydney for the first time, or coming to uni for the first time, and helping them settle within the uni culture or Sydney culture and just answering their hundred questions. Like, “Where do I get my ID card from?” till, “Where do I get” – so one of my mentees asked me uh “Where do I get a mouse from, like a computer mouse?” So, I was like, “Okay”.

Aashna Mittal: So, Indian Classical Music is based around raags and there are 10 raags, or we also call ragas. And, ah, each raga is based around a composition which, a composition which has some set of, you know, sargam. Sargam is basically the musical notes. So, the musical notes are arranged in certain composition and that becomes one kind of raga. Also, there is an emotion behind every raga. So, certain raags are for, you know, expressing sadness. Some ragas are for expressing joy, and yeah, all sorts of different emotions. With every raag there is a particular point of time that you’re supposed to sing. So it’s sung between 12 to 3 o’clock in the morning, like 12am to 3am, like that’s the time the song is, this raga, is sung, and it goes like [sings]