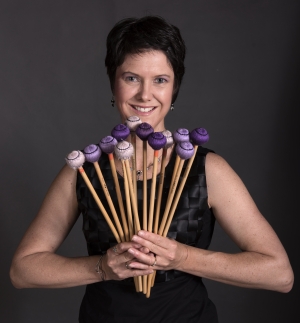 Percussionist Alison Pratt was scheduled to return to the Sir John Clancy Auditorium stage for the third Australia Ensemble UNSW concert in 2021. She was to play marimba for the performance of And Legions Will Rise by Kevin Puts, originally programmed for the cancelled 2020 season. We recently talked to Alison about her journey to becoming a freelance percussionist and what it was like returning to the work over the lockdown.

What drew you to the world of percussion initially? Growing up in Perth, there was always music in the house. Both my parents played the piano and my mother received singing lessons from the well-known soprano Molly McGurk. She was involved in various musical theatre productions around Perth and was in a vocal trio which performed at local music societies and venues.

I commenced piano lessons when I was 8 and studied the classical guitar in my final two years of primary school. After being accepted into Perth Modern School – one of two music scholarship high schools in existence back in the 1980’s, I was informed that piano and classical guitar were not instruments that can be integrated easily into an ensemble, so I was instructed to choose a band or orchestral instrument. I ordered my preferences as: 1 – flute; 2 – clarinet: 3 – saxophone.  I couldn’t think of a fourth instrument that I wanted to learn.

I still remember my mother’s words: “Percussion sounds interesting. Why don’t you write that down?”

The school programme already had too many wind instruments and a lack of students wanting to learn percussion, so percussion is what they offered me! I had already had a taste of percussion when I was in kindergarten, playing the drum in “The Little Drummer Boy” at the end-of-year Christmas concert.  Little did I know then that I would make a career in music as a percussionist!

Could you share some moments in your career that stand out to you? There have been many musical highlights over the years. One that stands out and was pivotal in my career was winning the ABC Young Performer of the Year in 1995, in which I was the first percussionist to ever win.

Another important highlight for me was being asked to be the Young Associate Artist with Synergy Percussion in 1994 - a dream come true for me, as I had been in awe of this prestigious percussion ensemble since experiencing their live performance and masterclasses during their visit to Perth back in the early 1990’s. I remember saying to myself “I would love to be in a group just like this”. My wish became a reality when I was accepted as the 5th member of Synergy in 1997. I feel very privileged to have been a part of this incredibly musical and diverse group of musicians and to have experienced so many amazing performances, tours, festivals and collaborations with an array of world-class musicians and artists.

Another highlight was being involved in Graeme Murphy’s Sydney Dance Company production of Free Radicals - a production featuring 3 percussionists live on stage with the dancers - from its creation in 1996 until 2000, where the show was performed throughout Australia and toured to North America, Europe and Asia.

What a variety of musical settings you’ve performed in! What was performing with a Dance Company like? Working with dancers was a new and refreshing experience for me back in the late 1990’s with the Sydney Dance Company. They were such a vibrant and stimulating group of young artists to work with.  The main challenge with this production of Graeme Murphy’s Free Radicals was that the 3 percussionists involved came in on the very first rehearsal with not a note of music written nor any choreography worked out. This was the first production where the choreography of Graeme’s and the music, composed by Michael Askill, one of the founding members of Synergy Percussion, was created simultaneously in the studio. We had 6 ½ weeks to create an entire show before Opening Night!

I discovered that dancers tend to learn choreography counting even beats, usually in beats of 8, so it was a challenge for them to learn their steps when Michael was writing music with complex rhythms and sometimes odd time signatures. We three percussionists were also challenged by having to learn a dance routine with 3 of the dancers, using a combination of body percussion and simple dance steps! There were a lot of unknowns which made it scary but also exhilarating.

How do you balance and prepare for life as a versatile percussionist? The Bachelor of Music percussion degree prepares a budding percussionist to be versatile. Not only does this degree focus on the three main areas of percussion - snare drum, keyboard percussion (both 2 and 4 mallets) and timpani - but also exposes them to solo playing, world music, learning techniques for all of the various auxiliary percussion instruments and performing in various ensembles such as percussion, modern music, wind ensemble and orchestra. By the time a percussion student graduates 4 years later, they are fairly well prepared for anything the free-lance world might offer them.

What do you enjoy about playing percussion in a chamber setting? Performing with other like-minded musicians, whether it be a full 100+piece orchestra or a smaller chamber group or ensemble, is what I love most. The full orchestra is an intensely gratifying and thrilling experience for me. The chamber music setting I particularly enjoy as it is more intimate and more focused on soloistic playing. I love being able to share the stage with fellow musicians, creating and telling a story through music. I find it inspiring to be able to bounce off their musical ideas and channel their energy into my playing during rehearsals and performances.

And Legions Will Rise was originally programmed for the cancelled 2020 Australia Ensemble UNSW season, what was it like returning to and preparing the piece again this year? What should audiences listen out for? When I recommenced practicing the Puts earlier this year after several months break, the piece felt fresh and I was more energised when returning to work on it. Luckily, I remembered a lot from my preparation in the previous year!

According to the notes written about Puts’ And Legions Will Rise it is “about the power in all of us to transcend during times of tragedy and personal crisis” (a quote from Kevin Puts himself). It seemed a very apt time to be performing this work, during the current global pandemic crisis. The piece, scored for violin, clarinet and marimba, is performed in one continuous 17-minute long movement. It blends these 3 instruments’ timbres beautifully, at times combining the slow, lyrical lines of the clarinet and violin with the gentle rhythmic ostinatos of the marimba, and at other times all 3 instruments are in rapid energetic counterpoint, almost like they are in battle with each other. I was very much looking forward to performing this work with my colleagues Dimity Hall and David Griffiths.

How did you stay connected to music in isolation last year? Initially I enjoyed not thinking about music for a while. It was actually a relief to be forced to slow down and to have more time to do the things I love, such as reading and spending quality time with the family. I admit I became a bit of a Netflix/ABC iView and SBS on Demand addict for the first time ever! After a while I started missing playing, began practicing again and spent more time teaching, conducting and performing with my students.

Did you pick up or rediscover any new hobbies over this time? When my gym closed during lockdown, I generated my own exercise routines and I became much more proficient kicking a soccer and AFL ball with my son! During isolation I also engaged in more cooking and baking. It was an opportunity to try out more complicated recipes without any time restraints.

Are there any creative projects you are working on for looking forward to now? Apart from the Australia Ensemble performance coming up in August, I am currently working on an arrangement of Nigel Westlake’s Compassion for octet featuring the singer Lior and the Tinalley String Quartet which Musica Viva Australia is touring regionally in July and September. The percussion part has been reduced from about 5 players down to 1.  It’s a very busy and challenging part but I love the music and I’m looking forward to working and touring with Lior who has such a fantastic voice, and the other members of the ensemble.