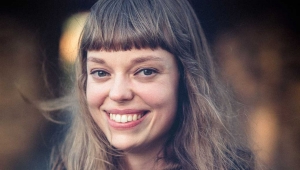 Holly Harrison's new work 'Slipstream' was due to be premeried in our October 2020 concert, A Song Before The Storm. Before we announce our 2021 season and Slipstream's new premiere date, we caught up with Holly to talk composition, COVID and commissioning.

My instruments, or should I say, weapons of choice, are drums, trumpet and flute, probably in that order, though, mostly, these days, only limited to an improvised context.

So, I’ve written a piece and it’s called ‘Slipstream’ and it’s for the Australia Ensemble UNSW, and it’s inspired by the concept of a slipstream, which is the current of air that trails behind a rapidly moving vehicle.

What can audiences expect from your new work?

So, the piece is cast in five movements and each of these movements is inspired or influenced by a different type of motion or momentum, in keeping with the slipstream theme. This is probably most obvious in the contrast between straight and swung rhythms throughout. And there is a fair bit of stylistic interplay in there as well.

I was also inspired by the theme of the original concert, which was entitled ‘A Song Before The Storm’, and so I spent a fair bit of time thinking about how I could apply this to the structure of the piece. So, instead of going down the literal track of a song before the storm, I thought it might be fun to weave these song-like melodies both before, during, between, and after the movements. Sort of stacking them on top of each other, and also side-by-side and this forms an outer frame.

So, stylistically, the piece embraces these ideas from blues and folk music, and also, I suppose, these bizarre sea shanty influences, jaunty swing, hot jazz, and also lyrical ballad moments. In fact, I’ve really enjoyed embracing my more lyrical side this time round. And if you know my music, you know that that’s a little bit unusual for me, but I’m definitely looking forward to exploring that more in the future. And so, if you listen closely, or maybe you don’t need to listen that closely, you’ll also hear a bunch of different foot stomps and also the occasional vocalisation as well.

How has COVID-19 impacted your work?

The main impact that the pandemic has had on my process for the piece was actually naming the work. I mean, I distinctly remember back in April or May reading this article about how there was increased fear about being caught in the slipstream of either a cyclist or a runner and how it might lead particles to be hanging in the air. And so, being the sort of – not hypochondriac, but someone that’s sort of hyper-aware of medical things – I used to find myself holding my breath as cyclists and runners, sort of, flew by. And this, absolutely, impacted the way that I then began to write the piece and sort of, interweave these lines. This sort of idea of one instrument or subsets within the sextet as a whole overtaking each other, perhaps some being left in the trail, or the wake, behind there.

In terms of the actual process, or my compositional process, it didn’t really affect me that much or as much that I thought that it might, purely from the point of view that I spend a lot of time at home writing as it is and I’m sort of in my natural habitat being on my own, in that way, and it’s actually, for a lack of a better way to say it, allowed me to really hone in and really get a lot of work and a lot of music written this year – that’s one positive to be found at least.

How can we increase diversity and inclusivity in the Australian music scene?

What can organisations and patrons do? Well, quite simply, more. Program more music by women composers and composers from diverse backgrounds. And not just one-off commissions, but continue to reprogram that music time and time again. I think that there’s also been a lot of positive steps moving towards this in the last few years, certainly since I started as a composer and I think that groups like Ensemble Offspring and the Tasmanian Symphony Orchestra (TSO) are really leading the way here, and I think that organisations like Australian Music Centre are also doing really amazing work, as well.