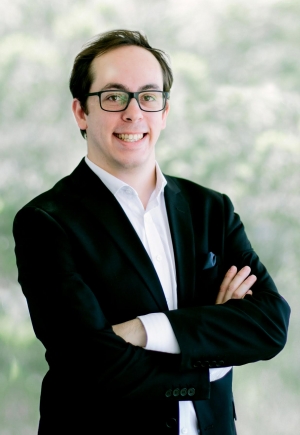 2019-20 Willgoss Choral Composition Prize winner Dr Philip Eames discusses the "pressure on marketing oneself as ‘emerging’ – to be young and exciting and someone to watch." and what it's like being a composer in Australia.

What was your inspiration for This Great Unrain: Three songs of drought for unaccompanied mixed choir?

To tell you a secret, I’ve never studied composition formally, but I’ve always believed that if you can read music, you can write music. And so over time I’ve developed a bit of a catalogue and composition has become more and more a part of my musical identity.

The inspiration for my choral cycle ‘This Great Unrain’ comes from a couple of calamities ago, when Australia was suffering in a prolonged state of drought which really set the scene for the devastating bushfires. And in December when this was gathering momentum I had a chance encounter with the playwright Carol Dance and I asked her if she had written any poems. A couple of days later she sent me a whole bunch of amazing new poems she had written virtually overnight. And one of them, ‘This Great Unrain’, seemed particularly salient when the country was in flames.

Tell us about being a composer in Australia. What are the challenges? What do you like about the Australian scene?

As I mentioned earlier, I have a fairly unorthodox pathway as a composer. I’m not particularly well connected in the composition scene. And in some ways, being separate means I can be very flexible and not overly influenced.

In terms of challenges, I find negotiating identities as a composer is very tricky. There’s a lot of pressure on marketing oneself as ‘emerging’ – to be young and exciting and someone to watch. And in some ways I could call myself an ‘emerging composer’, given that composition is only a small part of my musical life. But nevertheless, I think the concept of ‘emerging’ is something we should aim to be moving away from. It would be very strange if performers did that in the same way. Instead there is a very real thirst for achieving mature professionalism and being taken seriously as soon as possible.

Honestly though, if you look at what some of history’s great composers were doing in their teens let alone their twenties it is a wonderfully dismal exercise to compare oneself. At my age Beethoven was composing the Eroica, Mozart was a couple of years off dying and Schubert was already dead. And I realise we live in a very different time and culture, but it’s very easy to feel a little bit inadequate with my own output. And I think the idea of considering oneself ‘emerging’ is a strange advertisement to that fact.

I have a friend in the UK, the composer Michael Betteridge, who once passed on some really great aesthetic advice. He said, “Write what you want to write, not what you can write.” And to me, that is the great compositional challenge as I see it; developing one’s compositional technique to the point of being able to write the music you want to, not what you know happens to work. I’d also argue there’s another strain I’ve come to see in the intervening years which is also write what you have to write. And I think negotiating that in Australia, the can, the want and the need is very important and is a constant challenge. In my experience, having spent some time in Europe, Australian music and musicians are a little better at cross-pollination than overseas and I might put that down to the smaller music population but here it is a bit more of an eclectic mix and the boundaries between a lot of the musical fields are less likely to be insular and I think we’re richer for it.

What recommendations do you have for someone thinking about entering the Willgoss Choral Composition Prize for 2021?

My advice for entering the next Willgoss Choral Composition Prize, firstly I would think of the ensemble you’re writing for: The Burgundian Consort. What is their sound? What texts might appeal? And also, how will you be creative within those parameters? Also, look at other choral works and learn and absorb from them. And finally, write practically for the voice. Sing through all the parts yourself. I know the composer Charles Ives once said, “Is it the composer’s fault that the pianist only has ten fingers?” meaning that, you know, why should we adhere to performer practicalities? But know that this is a piece that is intended to be performed so I think some compromise is warranted in this day and age. And finally, realise that you’re creating a work that will be added to your own libraries, so regardless of the outcome, remember that you’re gaining something very valuable.