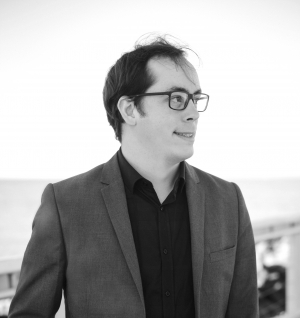 The Willgoss Choral Composition Prize is aimed at encouraging and promoting the creation of an original work for unaccompanied choir, in support of a thriving choral program at UNSW Australia as represented by the Music Performance Unit.

Philip Eames is a composer, pianist, and musicologist based in Sydney. He studied piano under Max Olding and Stephen Savage and composition under Adam Gorb at the Royal Northern College of Music, Manchester. In 2017 he was awarded his PhD with a dissertation studying the choral music of Percy Grainger. He is currently a sessional lecturer in musicology and research at the Sydney Conservatorium and an active choral conductor and accompanist.

As a composer, Philip was announced the winner of the Tagore and ASKM Composition Competitions and was selected from a national field to take part in the Flinders Quartet 2018 Composer Development Program. Commission highlights include the Black Square Quartet, The Australian Voices, Queensland Ballet, Collusion and the Australian National Piano Award. In 2019, Philip was a featured composer in the Grainger Wind Symphony Australian concert series and his third string quartet based on the short stories of Oodgeroo Noonuccal received multiple performances with dance as part of the 2019 Quandamooka festival.

His winning work This Great Unrain: Three songs of drought for unaccompanied mixed choir will be given its first performance by the Burgundian Consort on Friday 2 October 2020 at 7pm.

This Great Unrain is a choral cycle that takes Carol Dance's text on the current state of Australian drought and paints it from multiple perspectives. It does so by teasing out various interpretations of the prose as the voices exclaim their lines in an overlapping and often non-linear fashion. The music veers between bold declamatory statements, sombre moods and more uplifting optimistic moments, while the question of an undecided future overshadows the work as a whole. Each verse is separated to create the three short and contrasting movements: