The fun of October! | Music Performance

The fun of October! 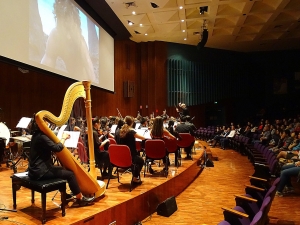 October is always a busy month for concerts in the Music Performance Unit.

Things kicked off with an Australia Ensemble free lunchtime concert on Tuesday October 11, and a piano masterclass at which two undergraduate students and one postgraduate music student worked with Australia Ensemble pianist Ian Munro. Friday October 14 was the final UNSW Wind Symphony concert of the year, called ‘Condition Red’ and including a broad array of wind ensemble works. Continuing a week of final concerts, Saturday October 15 was the last of the Australia Ensemble’s subscription series, at which they were joined by 55 singers of the Sydney Children’s Choir in a program entitled ‘A Flock of Stars’. As always, the final concert was followed by the obligatory sparkling wine and deluxe chocolate truffles for the entire audience. The following week the fun continued, with the UNSW Orchestra presenting a program ‘Lost among the stars’ on Friday October 21 with a new work by Honours student in the School of the Arts and Media, Ryan Sorenson, performed with an excerpt from the film ‘Cast Away’. Music student Daniel Parkee performed ‘The Butterfly Lovers’ Violin Concerto, which he had previously performed an excerpt from in a Chinese Folk Music Workshop a week earlier with the Confucius Institute. The concert concluded with the film favourite, the suite from Star Wars. Two days later, on Sunday October 23, we were back in Clancy Auditorium for the second of the Collegium Musicum Choir’s concert series. Four alumni of UNSW and its choral program sang the solo roles in Mozart’s ‘Credo’ mass, before the Burgundian Consort performed unaccompanied mixed choruses by Hungarian composer Zoltan Kodaly. The final work, presented by the Collegium Musicum Choir and guest organist Michael Butterfield, was Kodaly’s magnificent Missa Brevis, with six members of the choir taking on the demanding solo roles. It’s been a big month, but a very rewarding series of concerts for everyone involved.

We have now launched an online system for buying Australia Ensemble subscription tickets for 2017, which we are extremely excited about!

Now we look forward to the Christmas concert on November 27, and all the exciting plans ahead in 2017. We hope you'll join us.

Friday October 14 was 'Condition Red', the final 2016 concert of the UNSW Wind Symphony

UNSW Orchestra took to the stage of Clancy Auditorium for its final 2016 concert, 'Lost among the stars'