How the stars were shining! | Music Performance

How the stars were shining! 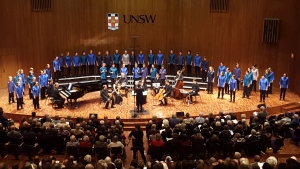 If you look closely, you'll notice Australia Ensemble associate artist David Griffiths in the middle of the Clancy Auditorium, creating a bit of extra excitement in Saturday night's performance of Lyn Williams' A Flock of Stars with the Sydney Children's Choir. The program began with Connesson's energised trio Techno-Parade, and Roger Smalley's exquisite Piano Quintet, before the Sydney Children's Choir and Australia Ensemble together presented a series of works, beginning with Williams' piece as well as Debussy's Noël des enfants, Joseph Twist's Jubilate Deo, and Paul Stanhope's Songs of Innocence and Joy. The production team took great delight in the special purchase of a 'deluxe duck' whistle specially for the occasions!

The second half was an additional treat, with the four string players of the Australia Ensemble joined by guest artists Christopher Moore (viola) and Meta Weiss (cello) for Brahms' magnificent String Sextet Op.36. What a way to end the year! It's only fitting that the celebrations continued, with the audience treated to chocolate truffles and bubbly at the end of the concert, looking forward to the Voyages ahead in 2017.

To hear the performance tune into ABC Classic FM on Tuesday October 18 at 8pm!

Our fantastic front-of-house team prepared an abundance of handmade chocolate truffles for the audience at the end of the concert on October 15.