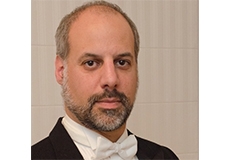 Steven is a versatile conductor and educator who is widely recognised for his work in both the orchestral and symphonic band fields.

Steven graduated with a Bachelor of Music degree in 1992 from the Sydney Conservatorium of Music studying French Horn with Anthony Buddle and has performed with orchestras including the Australian Chamber Orchestra, The Australian Opera and Ballet Orchestra and the Sydney Philharmonia Orchestra.

In 1993 Steven completed a Graduate Diploma in Conducting at the Sydney Conservatorium, studying with Henryk Pisarek and the following year was offered a place in the Master of Music course, graduating in 1997, with John Hopkins as his teacher. This was the first time a Masters in Conducting had been offered. In 2019, Steven completed his Doctoral studies at the Sydney Conservatorium, studying with Eduardo Diazmuñoz while undertaking research into the forgotten Hungarian composer, Tibor Idrányi.