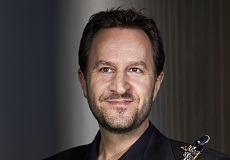 David Griffiths is a member of two of Australia’s leading chamber music ensembles, the Australia Ensemble UNSW and Ensemble Liaison. He also holds the position of Associate Professor of Music (Clarinet) and Coordinator of Chamber Music at the Melbourne Conservatorium of Music, the University of Melbourne. A passionate educator and performer, he has presented masterclasses and performances in Asia, Europe, United States, the Middle East and Australia including a critically acclaimed debut in Carnegie Hall’s Weill Recital Hall. As a soloist he has appeared with the Melbourne Chamber Orchestra, Tasmanian Symphony Orchestra, Sydney Symphony Orchestra, Orchestra Victoria, Australia Ensemble UNSW, Shanghai Radio Orchestra, Macau Orchestra and the Monash Academy Orchestra. As a member of Ensemble Liaison, he curates and performs an annual three-concert series at the Elisabeth Murdoch Hall at the Melbourne Recital Centre which is currently in its 16th season. He has also performed with the New Zealand, Goldner, Tinalley, Acacia, Flinders and Australian String Quartets, the New York Wind Soloists, and the Southern Cross Soloists. He has collaborated with many leading artists including Nemanja Radulović, Ray Chen, Anthony Marwood, Henning Kraggerud, Emma Matthews, Cheryl Barker, Peter Coleman-Wright, David Jones, Paul Grabowsky, Tony Gould, and has appeared at the Australian Festival of Chamber Music in Townsville, Port Fairy Festival, Lucerne Festival and the Pacific Music Festival in Sapporo, Japan.

Some recent highlights include a performance of John Adams’ Gnarly Buttons Clarinet Concerto with the Australia Ensemble UNSW, the Weiland Concerto with the Melbourne Chamber Orchestra, a collaboration with accordion virtuoso James Crabb, Mozart’s Clarinet Quintet and Concerto at the 3MBS Mozart Marathon and the complete chamber works of Brahms in one day in collaboration with Timothy Young, Svetlana Bogosavljevic and the Australian String Quartet.

David’s recordings with Ensemble Liaison of Messiaen’s Quartet for the End of Time for the Melba Recordings label and Trios of Brahms, Beethoven and Bruch for the Tall Poppies label have won high praise from critics around the world. He is a Backun Clarinet performing artist.

David Griffiths appears courtesy of the Melbourne Conservatorium of Music, the University of Melbourne

“Clarinetist David Griffiths performed the work with flawless technique, and an exquisite sound. His altissimo register was particularly stunning, as was his sensitive phrasing in the slow middle section of the work.”  Adelaide Advertiser

“David Griffiths was a superb soloist, his dynamic range including some sublime pianissimo and his facility demonstrated in the recurring cadenzas.”  The Age

Griffith's silky tone and easy execution of the work's sparkling virtuosity quite exceptional.” The Australian

"an impassioned and committed performance ... not just technically superb but spiritually intense too." The Classical Review