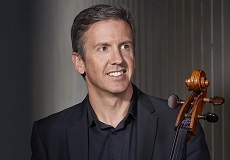 Julian Smiles has for over 30 years been a central figure in cello performance and teaching in Australia. On graduating from the Canberra School of Music at the age of nineteen he was appointed principal cellist with the Australian Chamber Orchestra and rapidly gained prominence as a chamber musician in performances for Musica Viva Australia, Kathryn Selby and Friends and at the Huntington Estate Music Festival.

In 1991 he was invited to join the Australia Ensemble UNSW, and in 1995 formed the Goldner String Quartet with colleagues Dene Olding, Dimity Hall and Irina Morozova. With these two chamber groups he has performed to critical acclaim at major venues and festivals throughout the world, made over 30 CDs on leading labels, and premiered many works by Australian and international composers.

Julian’s appearances at festivals over the years have included artistic collaborations with musicians such as Piers Lane, Tasmin Little, Edgar Meyer, Alexander Sitkovetsky, Amy Dickson and James Crabb. He has also been engaged as a collaborative artist in the chamber music round of the Sydney International Piano Competition of Australia on numerous occasions.

Julian is active as a soloist with numerous concerto appearances. During 2018 Julian’s high standing as a performer was recognised by the Canberra Symphony Orchestra, as their inaugural “Artist in Focus”. In this role he performed recitals and appeared as soloist with his wife Dimity Hall and pianist Piers Lane in performances of the Beethoven Triple Concerto. He has also premiered works for solo cello by eminent Australian composers such as Carl Vine, Mark Isaacs and Ross Edwards.

Having studied with Nelson Cooke and renowned cellist and teacher Janos Starker, Julian has developed a system of cello playing based on thorough and ongoing analysis of musical and technical issues that sees him sought after as a teacher and chamber music coach. He has held teaching positions at the Australian Institute of Music and Canberra School of Music, and is currently Senior Lecturer and Coordinator of Cello at the Sydney Conservatorium of Music.